We’re finally unpacked! Most of the boxes are gone. We can (mostly) find everything and we are ready for visitors which is just as we’ll as the have some friends coming to stay on Friday.

In the end we have split the collection between a bedroom and the cellar. The landlord came to look at the water in the cellar and decided it was simply due to the change in temperature as the house is new and hasn’t been lived in before. We’ve had a dehumidifier running for three weeks and its thankfully dried out. It was enough to panic Scifiwife hubby though so all paper based collectibles and the statues are in my office and the ‘toys’ etc are in the cellar. 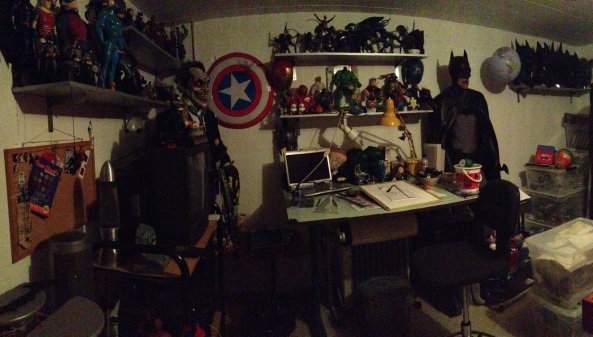 Scifi hubby has spent the last three weeks unwrapping the collection which has been a traumatic experience to say the least. He has now found everything but we had a week when he raced around like a headless chicken as he remembered something else that he hadn’t seen yet. He would be happily unpacking a box of books when he would suddenly shout ‘BATARANGS’ and then fly around the house looking in every box until he found them. Now bear in mind that there we 381 boxes so this whole process could take some time and for some reason seemed to mostly start at 11pm. In fact it took three days to find the batarangs with lots of swearing, complaints about removal men and pathetic random cries of ‘batarangs’ like a small child looking for a lost toy.

Meanwhile I unpacked the whole of the rest of the house, sorted the food shopping, cooked meals oh and started my new job. I’d get pulled into the occasional batarang hunt but it seemed my lines of ‘it will turn up once you’ve unpacked everything’ were more like a red flag to a bull than helpful.

We were really lucky in terms of damage and loss. The only thing that is completely missing is the digital TV box which is easy to replace at least. From a house perspective there’s a broken clock, broken radio and damaged computer speakers. From the collection there was one painting with broken glass but no damage to the painting and four damaged books. That’s it! No broken statues, smushed comics, damaged paintings, lost autographs or batarangs. Well done removal men. Now we’ve just got to hope that the insurers understand the value of books as it is, predictably, four hard to get hold of books that are battered.

———————–
Wampa update – we remembered to collect him from the old house and he has now taken up residence in our new fridge along with Luke and Han Solo. There’s almost more toys than food in the fridge now…