We decided months ago that the nursery would have a superhero theme. There really was no getting round it. Then Scifi hubby saw a set of furniture he loved. Now he doesn’t normally go crazy over furniture so this was a little unexpected but he fell in love with a car themed bedroom. A car shaped bed, a petrol pump for a wardrobe and a toolbox for a chest of drawers – all in bright red. The problem was how to fit this in with superheroes…

The solution is the Batcave. I never really noticed but apparently Batman has a full garage down there. How else does he keep the Batmobile running and full of fuel? He can’t exactly pull up to a garage and ask them to have a look at the brakes or to change the tyres now can he? Similarly he can’t really pull into a petrol station to fill up. For a start he’d look pretty silly and for a second where would he keep his wallet? As my mother pointed out he can’t exactly put it in his skin tight suit and it would spoil the lines of his cape if it had a pocket.

I particularly love that this saga involved my mother discussing the finer points of Batman’s costume. She normally just rolls her eyes at Scifi hubby, smiles and humours him (just as she is probably doing now whilst reading this – hi mum!). However my parents are really kindly buying the baby’s furniture for us so we had a very long conversation about filling the Batmobile with petrol and where Batman keeps his wallet. Scifi hubby later suggested it could go on the Bat-utility belt but no one thought of that at the time.

So the nursery is on the way to becoming the Batcave (1960s version all primary colours and not really black) with the Avengers crashing through the ceiling for a bit of DC/Marvel balance. Complete with a ‘Bat toolbox’ and a ‘Bat petrol pump’. We even have a dinosaur (or it could be a dragon) called Victor.

I have drawn the line at a racing car bed for now though. Mostly on the grounds that baby won’t need a proper bed for a few years yet so we need a cot not a bed – and no he’s not turning the cot into a Batmobile. He has, however, managed to talk me into making Batman and Superman cot bed sheets. 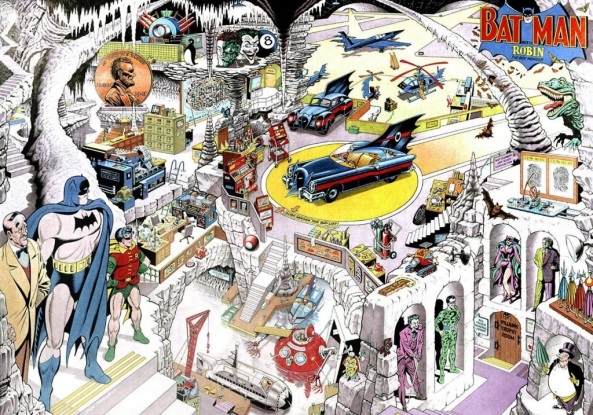 What a shame we don’t have more space…

I’ve been out for dinner tonight with some people from work. We’ve had a lovely evening. We had cocktails on the roof terrace then great food in the garden restaurant. They are a group I don’t know very well yet but will be working with a lot in the coming months. Maybe I should have thought about this before my geekiness began to show…

As dinner table conversation flowed from work to holidays to restaurant recommendations to the Olympics to Delboy and Rodney being Batman and Robin to the latest Batman movie I found myself explaining the whole DC v Marvel universe. In WAY too much detail. No normal person should know this stuff.

Someone said they liked the new Spiderman movie but couldn’t understand why they were telling the back story all over again. What possessed me to actually answer I’m not sure but I did (I’m blaming the cocktails). How do I know the names of all the Avengers and all the Justice League? How do I know about Sony having the rights to Spiderman and Marvel wanting them back so they can include Spidy in the next Avengers movie? Why does no one seem to know that there is an extra clip after the end credits on all the Marvel movies which all link together? How do I know so much about the new Superman movie. And what ever made made me think that normal people would know or care who Adam West and Burt Ward are?

I’m hoping I didn’t sound as insane as Scifi hubby can at times. I didn’t rant about the Batman movie. I didn’t declare undying love for Superman. I didn’t tell them I’m half an inch too tall to be an Ewok. I didn’t mention the collection or conventions or that I was wearing Batgirl knickers (yes really). I think I pulled it off but I guess I’ll find out in the office tomorrow… 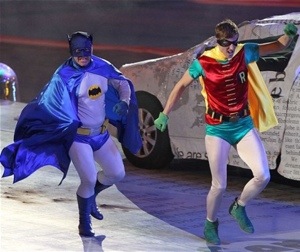 Batman and Robin appearing at the Olympic Closing ceremony

We went to see the new Avengers movie yesterday. Scifi hubby was very pleased with himself for showing his true allegiance by wearing a DC tshirt and DC converse whilst going to see a Marvel movie – oh the irony. On a positive note he was a very happy boy and bounced all the way to the cinema, collecting his monthly comic order from the comic shop along the way.

We had the fun of seeing it with French and German subtitles. This isn’t a problem usually as you can just ignore them but there are two sections of the movie which should have subtitles into English and somewhere the translators missed that out. Trying to translate from German whilst Black Widow is being ‘tortured’ was interesting.

I love the way the cinema here, despite having sold only 25 seats in a huge cinema which could seat about 500 people sat everyone next to each other. At the very end of the movie (don’t panic not a spoiler) as the credits started the guy next to us stood up to leave. I found myself leaning over to tell him not to go as there’s a ‘hidden’ clip after the credits. Argh I’m turning into a geek.

But you know what, I actually enjoyed the movie. It’s a little long in parts but the story is quite good for a comic movie, I do actually (almost) care about the characters now, its fun seeing sections of New York get destroyed, I like the clever links to the other Marvel films and mostly it’s just good fun and worth watching just to see Captain America’s bottom in tights… 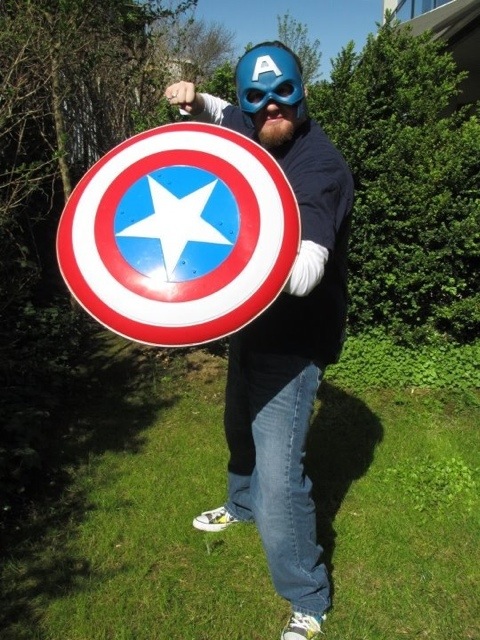