I feel like I’ve just helped my husband to dump a girlfriend. We’ve been going to the same comic shop for over four years now but since we moved house the shop is now a two hour drive away. We’ve been going back every couple of months anyway as he likes and trusts them but also because they are one of only three shops in the country that can order through Previews, the catalogue of forthcoming comics, books and other stuff from the American publishers. They have very kindly posted his copy of Previews to him for the past few months and he has emailed his order in but it’s not quite the same.

I finally persuaded him to visit one of the other Preview stockists last weekend. This one is only 40 minutes away and in a city I go through quite often to get to the airport. The shop is a bit hidden away but once we found it we discovered they have a good range of stuff and not just Tintin and Asterix which seem to be the local comic diet. Even better it seems the new manager is a Londoner, speaks English and understands/likes American comics himself. Hurrah!

Cue a series of emails, orders and plans as Scifi hubby starts to shift his forthcoming Previews order to them. The whole process started to feel like a series of first dates!

Then the hard bit – we had to visit the old comic shop to collect last month’s delivery and then tell them he was moving shops. Scifi hubby came over all tongue tied. It really felt like I was watching a teenage boy working out how to dump his first girlfriend. So I did it for him! I couldn’t bear the agony any longer so just told them straight.

We will still have to go back for a few more months as items we have ordered already finally arrive but hopefully by Christmas 2015 we should be done. 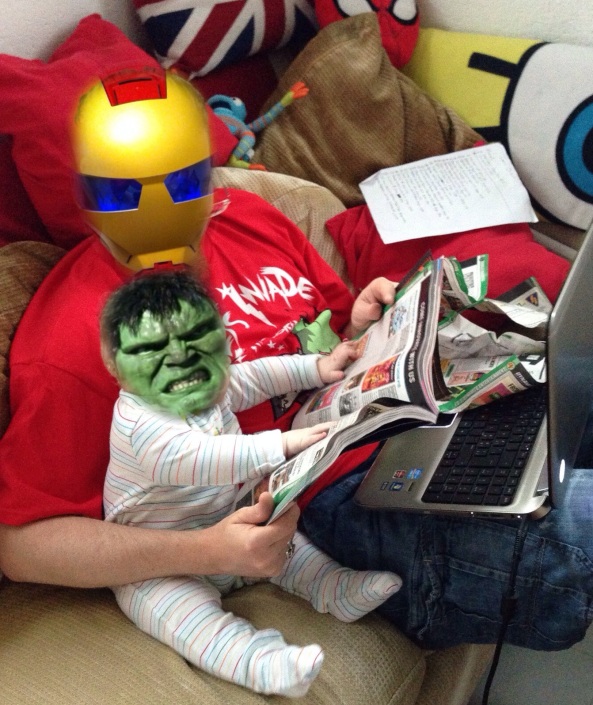 Scifi hubby is still away but his Previews order has arrived at our local comic shop. They would, of course, keep it a week or two but I thought it would be nice for him to come home to find a mountain of goodies waiting for him. So I nipped in on my way home from work.

Scarily they know me on sight now and instantly produced his order. They also know I don’t know a lot about comics so they don’t even try to talk comic stuff with me so we had a nice chat about the weather instead.

What I do love about this shop is that they have a loyalty scheme. Not quite on the scale of supermarket points cards or the Starbucks ‘buy nine get the tenth free’ scheme but I’ve never heard of another comic shop doing anything similar. Ended up getting £20 off the order today. Of course that probably just shows that Scifi hubby has spent a fortune with them in the last three months. Some questions are best not asked… 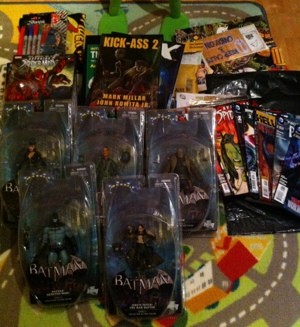 A pile of goodies waiting for Scifi hubby

I dragged hubby out tonight to have a few drinks with some friends of mine from work. I bribed him with Guinness and comics and said I’d meet him at the local comic shop. He was only able to drop his Previews order off if he met me – aren’t I evil?!

We had a whole evening of ‘grown up’ conversation about politics, the news, work and everything other than comics and scifi. Amazing!

It was only after three pints that I realised I hadn’t checked the Previews order, and then realised it ran to two pages this month. God only knows what he’s ordered…

It’s the obvious place to find a copy of Previews… 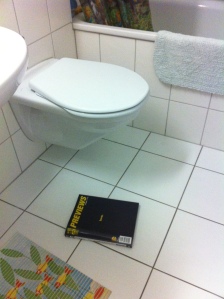