We decided months ago that the nursery would have a superhero theme. There really was no getting round it. Then Scifi hubby saw a set of furniture he loved. Now he doesn’t normally go crazy over furniture so this was a little unexpected but he fell in love with a car themed bedroom. A car shaped bed, a petrol pump for a wardrobe and a toolbox for a chest of drawers – all in bright red. The problem was how to fit this in with superheroes…

The solution is the Batcave. I never really noticed but apparently Batman has a full garage down there. How else does he keep the Batmobile running and full of fuel? He can’t exactly pull up to a garage and ask them to have a look at the brakes or to change the tyres now can he? Similarly he can’t really pull into a petrol station to fill up. For a start he’d look pretty silly and for a second where would he keep his wallet? As my mother pointed out he can’t exactly put it in his skin tight suit and it would spoil the lines of his cape if it had a pocket.

I particularly love that this saga involved my mother discussing the finer points of Batman’s costume. She normally just rolls her eyes at Scifi hubby, smiles and humours him (just as she is probably doing now whilst reading this – hi mum!). However my parents are really kindly buying the baby’s furniture for us so we had a very long conversation about filling the Batmobile with petrol and where Batman keeps his wallet. Scifi hubby later suggested it could go on the Bat-utility belt but no one thought of that at the time.

So the nursery is on the way to becoming the Batcave (1960s version all primary colours and not really black) with the Avengers crashing through the ceiling for a bit of DC/Marvel balance. Complete with a ‘Bat toolbox’ and a ‘Bat petrol pump’. We even have a dinosaur (or it could be a dragon) called Victor.

I have drawn the line at a racing car bed for now though. Mostly on the grounds that baby won’t need a proper bed for a few years yet so we need a cot not a bed – and no he’s not turning the cot into a Batmobile. He has, however, managed to talk me into making Batman and Superman cot bed sheets.

What a shame we don’t have more space…

I’ve waited a while to tell you this and I’ve been struggling to find a Scifi way to say it but I’m all out of ideas. I toyed with ‘It’s a trap’ or ‘Is it a bird, is it plane, no it’s a ….’. Scifi hubby suggested ‘Luke – I am your father’ but that doesn’t quite cut it either. So I’m just going to say it: I’m pregnant. We’re having a baby. A Scifi baby. In fact a Scifi son. What have I let myself in for?

We’re both over the moon. Scifi hubby has been excitedly buying all sorts of baby things since we found out (some of the funnier moments coming in future posts). I love the fact that I’m the one looking at prams, cots, baby baths, baby monitors etc whilst he’s hunting for the perfect Superman baby-grow

So the obvious questions and answers:
Baby is due at Christmas
I’m feeling fine but beginning to look like a hippo (if he dares call me Jabba he’s a dead Scifi hubby)
No the baby will not be called anything comic book or Scifi related. I’m diligently checking all name suggestions to make sure none sneak through.
The nursery is going to be superhero themed but both DC and Marvel – apparently our child will be “bi-comic curious”
We already have several Batman baby grows, and Superman, and Star Wars, and Iron Man…

If it is a superhero in there then my money is on a baby Batman. It certainly feels like he’s practicing his martial arts already.

Photo from a few months ago that we sent to friends to tell them the news. I’m looking more like a hippo now and that t-shirt definitely doesn’t fit me now!

Ok, so it didn’t really (I’m reliably informed that Wampas are carnivores and don’t like cheese) but Star Wars is beginning to take over the fridge to the extent that I can’t fit that much in it anymore. In fact the Hoth system appears to encompass the chest freezer as well. I need to send a droid probe in to find out exactly what’s going on but we seem to have Han Solo hiding under a bag of peas and a pack of frozen chicken.

Anyone know of a good way to evict Wampa, tauntaun, Luke and Han Solo? Maybe I need to send the Empire’s Imperial Fleet and AT-ATs in to get them out? On the other hand perhaps I shouldn’t even suggest that in case I come home to find an AT-AT in the freezer too. 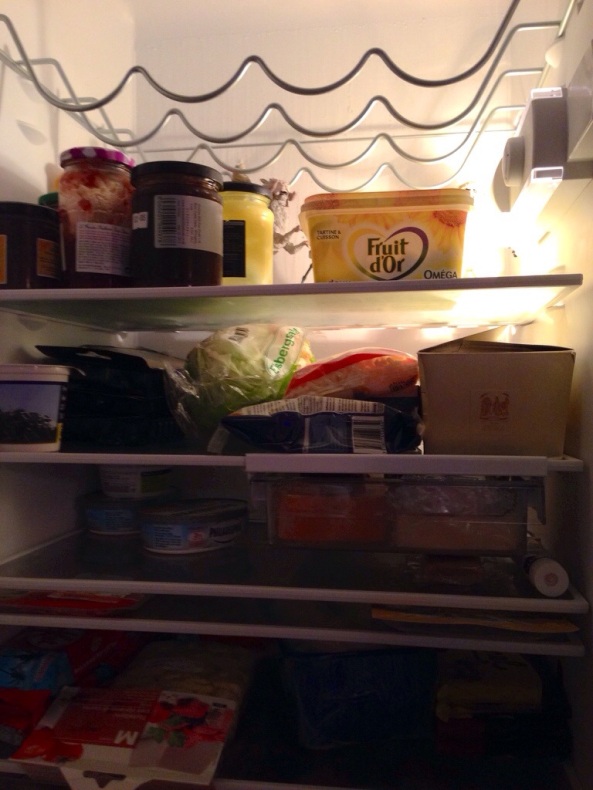 Can you see the problem?

They had better not eat my chocolates…