And then there’s cosplay… Now I fully admit I’m not a huge fancy dress fan. I have been known to put a costume on for New Years Eve (a story for another time but yes I was Princess Leia and no it wasn’t the metal bikini) or a party but I’m still not sure about spending the weekend dressed as Batman, Loki, Mr Fantastic, The Thing, Superman etc.

Cosplay does seem to attract a certain type of nerd. Most of them are super confident, play the part, pose for photos, prance around on stage for the competition. However there are always a few who seem really shy. I just don’t get it – why dress up and then be shy?!

Now the ‘buzzword bingo’ bit. I’ve got a growing list of cosplayers to spot at cons:

Super skinny Superman
Fat Jedi
Girl in latex/spandex who looks too amazing for ‘it’ all to be real
Girl in latex/spandex who really shouldn’t wear it
Girl in spandex who has black underwear on and hasn’t realise you can see it when a camera flash goes off
Girl in a corset style costume who’s breasts look like they are only just balanced in the fabric
Person with so much body paint they later realise they can’t touch anything, eat, drink or sit down
Parents who’ve dressed their kids up in something really embarrassing
Storm troopers
Short Darth Vader
Fat Batman
Random cartoonesque person who is apparently from some manga book
Grown women dressed as Japanese school girls, manga style
Muppets (I mean the Jim Henson kind)

Being a typical bloke Scifi hubby particularly likes the latex/spandex/painted girls. Here’s a few of his favourites from Kapow: 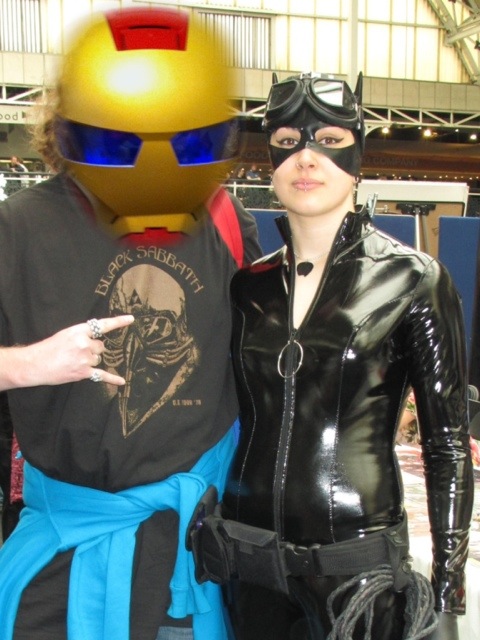 Comic conventions have a distinctive smell which makes the light and airy venue for Kapow perfect. In fact it may have been designed with comic nerds in mind. Spread over several levels with a very high glass ceiling the smell has a chance to dissipate and for once wasn’t the first thing you noticed! 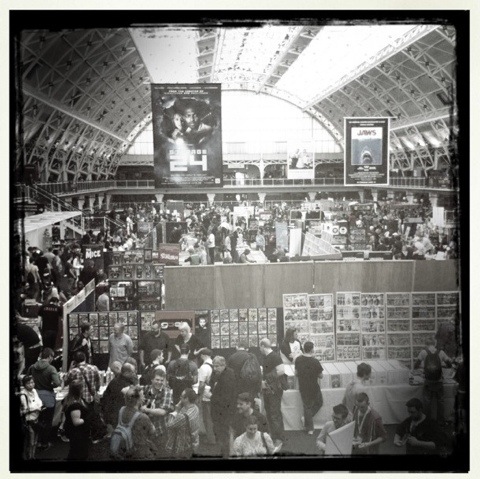 Scifi hubby was in his element – two days of comic book heaven. He got lots of autographs, a few sketches, too many new graphic novels (hard covers of course) and of course some comics. We also spent a lot of time in queues, made some new ‘queue buddies’, met Jonathan Ross, watched crap fake wrestling (don’t even ask but here’s video of Jonathan Ross taking part) and caught up with some fellow comic books friends including a few scifi wives.

I do love spotting the ‘girly touches’ at comic cons. There’s a growing range of DC and Marvel home furnishings available including mugs, cushions, tea towels and aprons. My new favourite has to be the Superman and Batman bathmats…

Finally home with a load of washing, comics to put away, sore feet but a very happy scifi hubby.

It’s Kapow Comic Con in London in eight days time. Skype, FaceTime, Facebook and every aspect of life appears to be taken up with planning for it. Key questions appear to include:

Which artists/writers are going?
Where will they be?
How can they possibly only sign for such a short time?
Will ‘my darling’ Scifi wife be nice to me and go and stand in a queue whilst I meet someone else?
Which books do ‘we’ need to take with us to get signed?
How much is our baggage allowance anyway?
Which artists are taking pre-Con sketches?
How much are they?

Not forgetting of course:

Which mates are going?
Which bar will they be in?

Scifi hubby isn’t as impressed with me asking:

Where’s the nearest M&S, Next, Monsoon, Debenhams, Starbucks?
How long can I spend shoe shopping?
Which is the best restaurant?
Do I really have to get up at 4am to stand in a queue for X, Y, Z…?!