A new TV series has just started on the Syfy channel called ‘Collection Intervention’ and I’m torn between laughing hysterically and calling them up to meet Scifi hubby. The first episode follows two couples as one partner tries to downsize the others collection.

The first couple are both Star Wars fans but she is completely obsessed. Their whole house is full of Star Wars stuff. Now I know friends would say that the same is true of our house but even Scifi hubby has NOTHING on this woman. We have one room dedicated to scifi (and the attic full of boxed stuff). There’s some ‘leakage’ into other rooms but nothing too serious. This couple had Star wars toys on every inch of every wall in every room and Star Wars wallpaper underneath. Shelves and shelves of memorabilia. Even their kitchen spatulas were Star Wars themed.

The second couple have a cat infestation – a Catwoman that is. He has collected Catwoman to the extreme and yet not kept anything properly. It’s quite sad actually that he’s got into debt over it and then he looses so much money on it all through buying bad pieces, keeping it in a garage and not knowing what he’s got.

The show has a valuation specialist, Elyse Luray, who helps them sort and part with some of their collections. She’s got way more patience than I would have with them. Crying over selling an Ewok – really? If you’ve got a spare hour it’s worth a watch: http://www.syfy.com/collectionintervention

All this does put Scifi hubby in perspective. He hasn’t hidden the collection from me (at least not since after I said ‘I do’ – that I know of!). It is mostly confined to one room. He does generally know what he owns. There is a certain sort of focus. He does understand the value of what he’s got and, mostly buys stuff that will increase in value. On a normal to ‘crazy collector’ scale of 1 – 10 I’d say Scifi hubby is about a 7.5. Bad but not certifiable – yet… 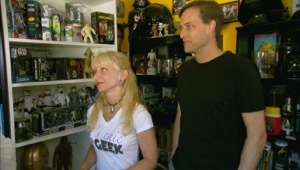