You know all about my obsession with the Smurfs but I haven’t dared to own up about my fixation with My Little Ponies yet, so confession time….

As a child I had almost all the My Little Ponies. Some were gifts but most were bought with pocket money. In fact my pocket money mysteriously went up whenever the price of My Little Ponies went up – clever parents! I’ ll always remember being given the My Little Pony castle for Christmas one year from my Grandfather. My brother got Skeletor’s castle and he kept stealing my ponies to use them as bad guys. Evil little brother. Then there was the baby ponies which my mum loved most. I vaguely remember drowning them in the bath at some point.

Predictably when I was ten years old I outgrew them. Our school was holding a car boot sale and I sold all of my ponies. I can’t even blame my parents, it was my idea and I did the bargaining on the day. Of course now I, almost, wish I had kept them. Although to be honest they would only be up the attic with the collection of egg cups, rock labels (the bits of paper that come with sticks of holiday rock), school books and all the other jumble!

That was until Hasbro brought out a My Little Pony game for the iPad. They are so cute. They dance if you tap them, play catch with a ball and fly. I’ve become hooked on playing with my ponies and harvesting their crops of lemons and bath towels (trust me somethings really are not worth knowing the details about). 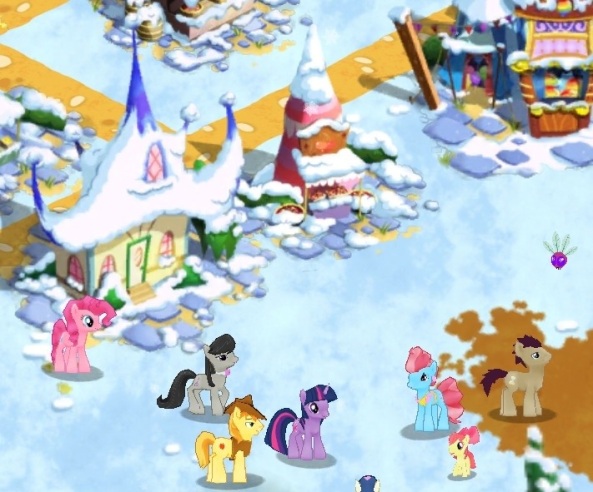 I had been resisting buying any of the toys. I don’t need them. We don’t really have the space (it’s all filled with Batman). And I already collect Mr Potato Heads. I even resisted buying ‘vintage’ ponies (i.e. the ones I sold) at New York Comic Convention. Somehow all of this fled from my brain when I got dragged to the comic shop this weekend. Just as we walked in the door there was a whole stand of My Little Ponies, including some of the ponies that I ‘own’ on my iPad. Scifi hubby can spend hours in the comic shop so I had a long time to look at them and dither.

In the end I decided to take a leaf out of Scifi hubby’s book with his Hot Wheel cars – he’s now having to buy me a pony every time he makes me go to the comic shop. I ended up with two on Saturday as we went back to the comic shop twice. Any bets on how long it will take for me to have all of them?

Apple Jack and Twilight Sparkle came home with us