I’ve mentioned before that Scifi hubby’s mother used to bribe him with toy cars when he was a child. The deal was that he got one Dinky car every time he went food shopping with her if he behaved himself. He got a surprising number of them. As a teenager he then proceeded to destroy most of the cars. They were target practice, parachuted from the attic window, dropped into the river, eaten by the dog etc etc.

When I started to drag him to supermarkets he discovered that they now sell Hotwheels cars so he had to have one if I wanted him to behave for the rest of the trip. The risk of him throwing a paddy, lying on the floor and screaming or taking all his clothes off (all of which I believe he did when misbehaving as a child) was too high so I caved in and the car obsession restarted. Somehow the number of cars necessary to make him behave has increased over the years – it cost me 111 Hotwheels over Christmas! On the plus side if I lose him in the supermarket I know I will always find him in the toy aisle somewhere near the Hotwheels.

However, what do you do with that many toy cars? He does at least open the packaging for them unlike the Star Wars and Batman toys. Apart from a couple of hundred cars which fill our glass topped coffee table, we now have a few thousand cars filling up boxes in our house.

My mother has always had a large glass jar which she kept a collection of sugar packets in. Scifi hubby has had his eye on it for a while now and keeps joking with her that he would get it when she died (not necessarily the best joke to have with your mother in law!). She surprised him this Christmas and gave him the jar with a ribbon on it.

Being slightly obsessive about these things Scifi hubby can’t simply throw all the cars in. No, he has to take the pole from the mop, put a lump of blutack on the end and lower each car individually into place. At least I talked him out of trying to colour code them. Even so, this could take a while but he’s a very happy ‘boy’… 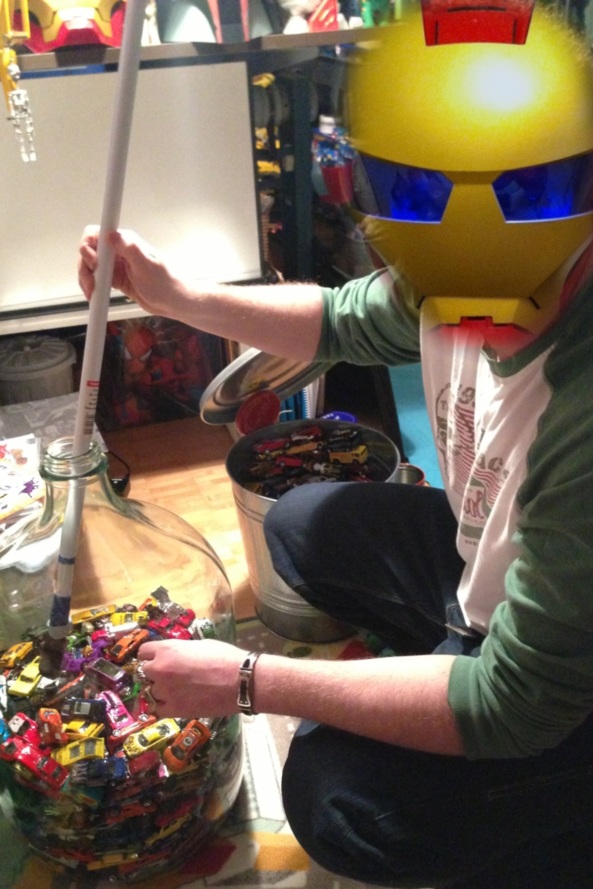 One comment on “Mother’s have a lot to answer for…”