Scifi and hubby and I have been together for over 14 years. In that time we’ve gone from skint students to skint newly-weds to to skint first time homeowners to, finally, having a little money to have some fun. Interestingly the amount of money we’ve had at any given time has been clear in what scifi hubby has added to his collection.

Years 6 -9
All of the above plus:
Graphic novels
12″ figures
More Batman stuff and less Star Wars
Travelling further for comic cons around the country

Year 12
All of the above plus:
Sideshow collectibles statues…

I’m told that Sideshow Collectibeles are THE statues to have and worth their ridiculous cost. I remain to be convinced about that but Scifi hubby is super excited that his first one has arrived. It’s partly how good it looks (and that I can agree with) and partly that we can at last afford to buy at least some of the things he’s always wanted.

So the box arrived

And the actual box 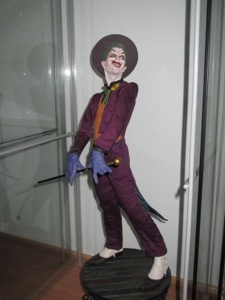 And the statue itself

Now we’ve just got to wait for his two friends to arrive.

And then see how many more SC decide to release – I don’t think the budget will stretch to the whole Batman universe or Justice League. Of course, we would have to win the lottery several times over to actually buy everything Scifi hubby would want. He’s currently ‘watching’ a life size Batman statue on eBay – keep dreaming babe… 🙂